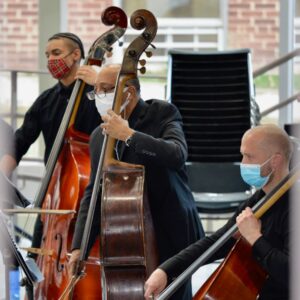 The Concordia Symphony Orchestra (CSO) is not just a community-based orchestra. It’s also an amazing opportunity for CUE students to get first-class mentorship. Students in the music program reach heights they never imagined they would achieve.

Third-year student Dante Wright beams when he says, “My time spent with the CSO, just over a year now, has been more beneficial to my music career than the previous seven years of practicing on my own and playing with other students.”

The reason for Dante’s progression is the mentorship he receives from experienced members of the orchestra, which can range anywhere from 40, 20 or 10 years experience.

Some of the connections with students and mentors go all the way back to junior high.

This is the case for Dante, who was “shocked” to see his junior high teacher, Ben Eldon, playing bass in the CSO. It was the very instrument that Ben inspired Dante to pick up way back in eighth grade.

“I missed the first day of instrument trials in grade seven, so I got stuck playing the trumpet,” Dante explained. “When Ben came along in grade eight he introduced me to the bass. I’ve always been interested in strings and had played the electric bass, so I thought I would go for it.”

“Ben was more than happy to teach me, and I was super motivated to learn from him. You don’t realize how good a teacher actually is though until you play alongside them in an orchestra!” – Dante.

“It was a great year teaching Dante,” remembers Ben, “He had never played the double bass before. He had seen me play, and he began learning alongside me. I connected him with the right group of kids, and they formed a rock band in grade nine with some friends.”

Ben said he was very surprised that Dante continued with the bass onto post secondary, “It was pretty awesome to see that I might have had some influence on him picking up the bass and be inspired to continue with it.”

Help when it’s needed most

Dante and Ben will both be playing in the upcoming CSO concert, entitled, “Impassioned” performing Tchaikovsky – Symphony No. 5.

“I’m looking forward to playing with Dante,” says Ben, “He’s made a ton of progress from junior high. Some of the symphonic repertoires we play are highly difficult, and I would meet up with him to look over any areas where he may need extra assistance.”

Dante speaks about how helpful rehearsals can be for the students. “We would do a couple of sections at a time – so it might be 30 or 40 bars, and then the conductor would stop and talk about what it should sound like, and what we should focus on. During that time Ben might point out a few areas where I went wrong and make helpful notes on my paper.”

Ben says he played in a student orchestra at his university, and explained that playing with talented professors was a whole different experience than just playing with students alone.

“I remember, one of the viola professors hopped in to play along. I could hear her sound just piercing through everything else. She was just perfect,” he said.

“Students at the CSO get that experience every time. Students then have to bring themselves up to the level of everyone else – this is a huge benefit about the CSO, students will play better than they would otherwise,” – Ben.

Taking on a challenge

Ben says playing bass in the upcoming concert is “incredibly challenging. There’s a lot of movement on the bass, it’s a very physical instrument. There are such wide gaps between notes and fixed strings, Tchaikovsky on a bass is not easy.”

Dante does not hide away from a challenge though. “My favorite music to play is classical. I like to take on some of the difficult pieces. If I want to just calm down and play some jazz, I sometimes enjoy playing just four notes, a bar and some nice moving harmonic melodies. Those are always fun, but I really enjoy the challenge classical presents.”

Dante says he is very excited to play in the upcoming concert, and looks forward to the Brazilian concert “Ginga” in December. “The concert will be a whole different style of music. It won’t be classical, it will be like bossa nova. It’s a lot of fun playing these different genres of music.”

The joys of playing on home ground

The experience of playing at the Tegler Student Centre is also part of the joy, says Dante. “It’s great to play in a familiar setting, and I love seeing students sit and watch the rehearsals after they’ve done their lab work or other classes. Afterwards, we will get the occasional applause!”

There are also opportunities throughout the year to play at other venues, like the Winspear. Dante says he can be nervous about upcoming performances, but doesn’t consider himself shy:

“Historically we’ve had sell out crowds of about 200 people. It can be nerve racking, but at the same time – by playing we get to see the fruits of our labor.” – Dante.

Students learn a great deal – and so do mentors

Speaking about his greatest learning experience, Dante says, “The greatest benefit for me is learning to watch the conductor. When in junior high and high school, you learn the music then play it by rote – you don’t really pay much attention to the conductor. But for these pieces because they are sometimes 20 pages long and an hour to play – plus they are so moving – you have to be focused on the conductor at all times.”

When asked how music helps with his other subjects at university, Dante believes that “music teaches you patience, perseverance and resilience.”  Dante lit up talking about music and its links to science, “It helps me understand other subjects better, like physics. There’s a lot of cool things to learn about vibrations and acoustics.”

Students learn so much, but as a mentor, Ben says he also has benefited from his and Dantes relationships. “Perhaps, I learn more from the students than they learn from me. Dante will ask me questions that are so profound and really get me thinking. So the benefit really goes both ways.”