New book explores the effects of technology on humanity 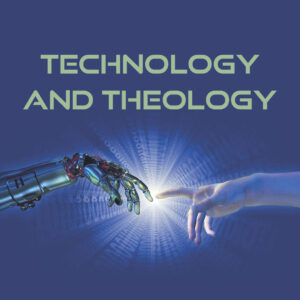 Concordia University of Edmonton (CUE) is in a unique position to not only be leaders in Artificial Intelligence (AI)  technology, but also be open to discussing its ethical implications through a philosophical lens.

Technology is of human making and growing at a rapid rate. “Today, every young person is practically born with a cellphone in their hands” says Bill Anderson, Professor of Pop Culture, Philosophy and Religion at CUE . “We are framing our lives around our devices and we’re at the beck and call of anyone who can reach us by text or email. This has both positive and negative implications to consider”.

Science fiction writers have had some sway on public perception, but marketers have a unique power to leverage how the public think about technology, says Bill.

“The most brilliant marketing strategy is the tagline, ‘‘The Future is Friendly’ by TELUS,” he says. “Their campaign cleverly addresses people’s huge anxieties about technology.”

Bill explains that the sixties modernist vision of the future was largely utopic, as seen in Star Trek of that era. Postmodern views, however, such as Blade Runner in year 2049 are dystopic.

Transhumanism and the idea of uploading the human mind into machines, is something that, if driven by corporate greed and profit, might spell disaster for humanity.

Bill says that he is fascinated by the philosophy of Ridley Scott. “In Blade Runner the question of who or what counts as human, especially in terms of advanced technology, is explored. The theological question arises in Blade Runner when the human replicas are “retired” or killed off. If they are conscious and sentient, would that be akin to murder? Or because they are replicas is it not considered murder?”

“Science cannot often quantify discussion of whether it’s the body that animates the mind, or if it’s the mind and soul that animate the body. For example, science has not been able to prove love or color,” Bill says.

The theory of transhumanism theorizes that humanity may have the capacity to transcend the limitations of biology with the aid of AI technology.

Mike Wade, Director of the Centre for Applied Artificial Intelligence at CUE, says that “AI is no longer a Sci-Fi prop or literature tool, but a real and developing societal and philosophical issue.”

Bill’s book dives deep into questions around AI and transhumanism and raises questions around what it means to be human. What is con-sciousness? What is soul?  The book discusses  whether computers will ever be able to achieve consciousness and sentience.

In recent years, pop-culture has had a fascination with zombies, as is evident by the popularity of The Walking Dead. Before the mainstream were talking about it, philosophers have for many years been discussing zombies, especially in relation to what it means to be human beyond the physical. Is consciousness a physical phenomenon reducible to just physics? And, when it comes to machines, does consciousness require biology? Dr Jonathan Strand, Professor of Philosophy at CUE, addresses this issue in his chapter “Will Androids Need Salvation: A Dialogue with Chalmers’ Philosophy of Mind”.

With the advancement of computers, their sophistication and abilities are quickly becoming comparable to the human brain. Chief futurist at Google, Ray Kurzweil, predicted that by 2045 computing will be around one billion times as powerful as all the human brains.

For readers of this book, it is worth pondering some of the realities that are to come with technology, and what effect that will have on our society. The writers of each chapter allow us time for reflection on the instantaneous digitized life we now live, and, as Mike says, it brings us on a “quest to understand who we are as human beings and perhaps where we can go.”

Everyone is welcome to the book launch for Technology and Theology on Monday, November 14, at 5 p.m. at Magrath Campus.