After winning four of their last 6 matches, the Men's Volleyball team was brought back to Earth on a tough weekend up in Fort McMurray. Coach Jacobson opened his comments stating, "after a long day of travel on Friday we lacked energy and had trouble executing our system. That – combined with a very good Keyano team that was firing on all cylinders – was a bad recipe for us."  The Thunder lost the quick match 3-0 with set scores of 25-19, 25-16 and 25-23. Connor Reeves was named Player of the Game.
Saturday was a touch better for the Thunder but with the powerhouse Huskies facing them across the net, they needed to be more than a bit better. "The effort was there but the execution was lacking again as we dropped another quick one 3-0. This loss took us out of playoff contention," lamented Jacobson. Nic Dove was named Player of the Game Saturday.
The Thunder will look to finish off the season on a high note this weekend against a tough Augustana team, at home Friday night and in Camrose on Saturday. 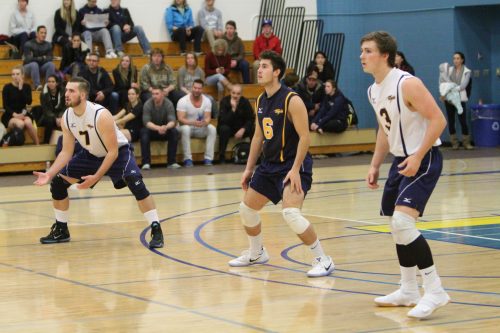