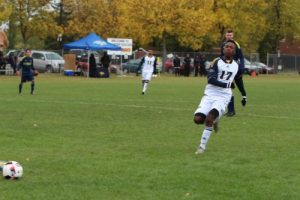 How do we measure progress? In the early days of September it was about competing with Kings, last year’s bogey team. This week it was about competing with Top 10, Nationally-ranked sides, and the audacious belief that Nationals qualification was even a possibility. “This was new territory to be explored and explore we did,” beamed Coach Skitch. In Friday’s quarter final round, the Thunder outlasted Lakeland College – the ACAC South Division’s #2 side – 1-0 on a Boothe header to qualify for a juicy semi-final with Keyano, the nation’s deserved #4 side and reigning ACAC Champion. Just two weeks before this, KC had just set an ACAC record for consecutive wins dating back to last season only for that streak to be ended by a little team in Edmonton called Concordia. The stage was set but alas it was not to be as KC took their revenge and prevailed 2-0. Well done, Keyano!  But not to be undone, the Thunder refocused on the Bronze and their target opponent, ACAC North rivals, the NAIT Ooks. “Two of our three league defeats were at the hands of NAIT but the belief was there that the gap had been closed so again the stage was set. Indeed the gap had been closed with the Thunder being good value for money in a 1-0 podium performance.”  Mas Arya sealed the deal with a first half screamer. Villanueva and Drissi were selected to the all-Tournament 11. “Bronze never felt so good; progress indeed.” – Thunder Head Coach Ian Skitch.