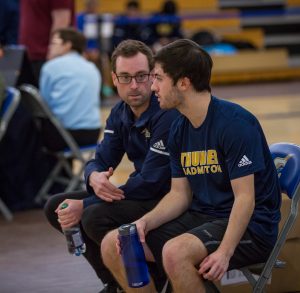 The Alberta Colleges Athletic Conference (ACAC) is proud to announce Kevin MacAlpine of the Concordia University of Edmonton Thunder Badminton team has been selected the recipient of the 2019-20 ACAC Coaching Excellence Award.

The Thunder badminton program was ranked in the top 5 nationally throughout the entire season and finished 1st overall in the ACAC standings with 497 points. At the ACAC Badminton Championships, the Thunder collected 3 ACAC Gold Medals in the individual competition and earned the silver medal in the team competition. At the CCAA Badminton Championships in Mississauga, On the Thunder managed to find the podium in the women’s doubles and women’s singles events bringing home two CCAA silver medals.

Concordia University of Edmonton’s Director of Athletics and Recreation, Joel Mrak, is very grateful to have someone like Kevin who cares so much about the student-athletes on his coaching staff stating, “Kevin has been outstanding as our badminton coach here at Concordia, as well as in the community and in the schools. He is passionate and one of the sport’s biggest supporters in Alberta and Canada. Being recognized as the CCAA Badminton Coach of the Year for the 3rd time this year was an outstanding achievement and definitely demonstrates the respect he has earned from his peers across the country. We are very proud and appreciative of all of his contributions to our program at Concordia.”

As both the head badminton coach and former golf coach, Kevin has been known for being very passionate about the success of his student-athletes during their time at Concordia and in their careers once they move on and graduate. Kevin has built a very strong and reputable badminton program at Concordia and a large part of that is because of the incredible relationships he has made with his student-athletes.