Looking to continue their winning streak, the Thunder Women’s Basketball team took on the King's Eagles this past weekend. King's is a different type of team than recent opponents that the Thunder have faced, with a lot of talent and continuous energy from their entire roster. “We couldn't afford to underestimate this new look King's team. They are coached well and work hard from start to finish,” opined Coach Valpreda. The Thunder took advantage of their home court on Friday night and set the tone with an early 7-0 lead. But things started to get a little ugly for the Thunder squad as the first quarter progressed, as they started to miss a lot of easy baskets and were just 1 for 7 from the free throw line. As the game wore on, the Thunder started to find spurts of momentum and went into the half up 36- 24. At halftime, Coach Valpreda addressed his troops and emphasized the fact that the Thunder squad was not playing with any effort, energy or hustle. “King's were doing a great job of setting the pace; we needed to play with a little more hustle.” As the second half began, the Thunder did increase their energy and hustle, creating plays and baskets at the rim instead of settling for jump shots. The Thunder also got a 'jolt of lighting' from American import Lacey Weddle. Lacey created some plays and made some shots that carried over the energy to the rest of the team. “Lacey played well tonight. It helped to give us some energy when we needed it most”. The Thunder proved they could don the work boots on defense and limit the Eagles to second chance opportunities. In the end, the Thunder took the game with a 75-56 win. Player of the Game was Lacey Weddle with 13pts and 5 rebs.
Saturday night the Thunder took the court at the 'Eagles Nest'. “This team is still learning how to play with each other. Our concepts now have to be about being sharp and executing what we know,” stated Coach Valpreda. The Thunder came out with excellent energy and jumped out to an early lead once again. But into the second quarter, it was the King's Eagles that battled back and closed the halftime lead to 30-24. “It’s the little things we need to be better at," averred Valpreda. It's not complicated but we tend to make it complicated. At times we over think things and all we need to do is keep it simple, finish plays on the offensive end and finish plays (rebound) on the defensive end." King’s came out soaring in the second half and took the lead. The Thunder tried to shoot their way back in the game but the ball would not drop, as they went 3-13 from the 3pt line.  But Concordia hung in there and led by Ann Stewart's offensive skills and Sofia Luccadello's defensive rebounding, the Thunder squeaked out with a 58-44 win. “We were challenged tonight and we stuck with it and showed character. We didn’t panic and grinded it out."  The POG for the Thunder was Nakita Newman with 13 pts and 7 rebs.
The Thunder will now finish off the first semester with a pair of games versus the Lakeland Rustlers. “If we aren’t focused and don’t come out to compete, we're not going to have a positive outcome. We're going up against a very well coached and very good team in Lakeland,” concluded Valpreda.  The home tilt will go Saturday night at 6 PM at the RKAC. 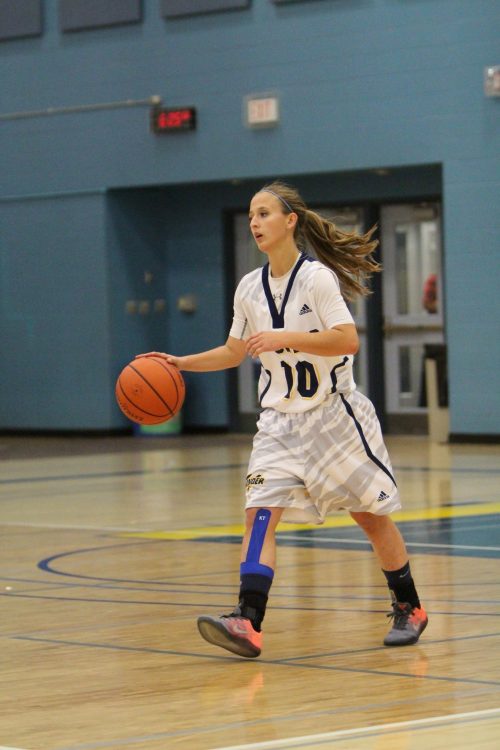