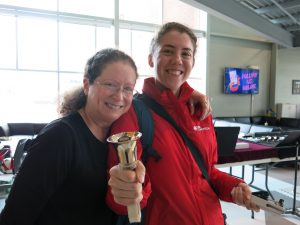 Thursday morning’s Edmonton AM radio segment is just the latest in a summer of handbell highlights for Concordia conductor Debbie Rice.

Last Friday’s noontime handbell recital was excerpted in the CBC segment, which included an interview with Debbie. (How is playing handbells like eating an ice cream cone? Tune in above!) And those recitals concluded a week of introducing handbells to 27 Singspiration campers. And to 23 students from Capital Normal University in Beijing, China, in a summer session!

Debbie started off the summer on the latest international handbell tour she’d organized, where she and 60 ringers from around the world introduced the instrument to Spain. Capacity crowds flocked to hear arrangements of classic Spanish repertoire and music representing the cultures of all participating ringers, and were enthralled by the unique sound. The concert at Spain’s third largest cathedral, the Basilica of El Pilar in Zaragoza, accommodated 1200 with many more turned away.

Judging from the blockbuster tour, growing media coverage, and avid interest from the summer students, interest in the instrument continues to mushroom locally, nationally, and internationally. And with an outstanding conductor and ensembles and the largest handbell and handchime collection in Canada, Concordia is ready.