Dr. Bill Anderson is pleased to announce the publication of his sixth book on Film, Philosophy and Religion. 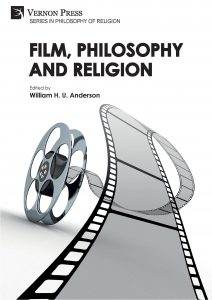 Dr. Bill Anderson, Professor of Pop Culture and Religious Studies at CUE, is pleased to announce the publication of his sixth book (fourth edited volume with Vernon Press) on Film, Philosophy and Religion.

Dr. Travis Dumsday’s chapter is “Watching Prisoners Through the Lens of Patristic Teachings on Evil, Demons and Spiritual Warfare” and Dr. Jonathan Strand’s is “Aristotle at the Movies: Epistemic Virtue in Film”.

Bill’s own chapter, “King David as a Biblical ‘Goodfella’ and ‘The Godfather’: Cultural-Social Analogies with Monarchy and La Cosa Nostra”, was read by Martin Scorsese who gave it “Two Thumbs Up”.

For more information on the book, please go to https://www.amazon.com/Film-Philosophy-Religion/dp/1648892922/.