On Tuesday April 11th, the Concordia Thunder Athletics community celebrated this past year’s achievements and outstanding performances at the 2016-17 Thunder Athletics “Blue and Gold” Awards Banquet.  The banquet was held in the Robert Tegler Student Centre and was attended by some 190 Thunder Athletes, Coaches and Concordia Dignitaries.

Kicking off the evening, the Men’s Soccer team was led to the stage by Women’s Soccer Head Coach Franco Imbrogno – standing in for the Men’s Head Coach Ian Skitch.  The Soccer Men wasted no time in naming Israel Olufuwa as the team’s ‘oldest ever’ Rookie of the Year! Next up, third year Midfielder Matt Hanson was selected as the Most Dedicated Player.  First year Midfielder Kenneth Johnson’s GPA earned him this season’s Outstanding Scholastic Athlete award.  For the second consecutive year, team Captain Jose Villanueva was honoured with the Most Valuable Player trophy and remained at the podium to collect his ACAC All-Conference parchment, also for the second consecutive year.

The Women’s Basketball team and Coach Robbie Valpreda began their portion of the evening naming third year Guard Kendall Armstrong as their Most Dedicated Athlete. Next up, third year athlete – and first year Concordian – American born Lacey Weddle was selected as the Most Improved Player with team Co-Captain Ann Stewart reeling in her second consecutive Outstanding Scholastic Athlete parchment.  For the second year in a row, another veteran athlete – in just her second season in a Thunder uniform – Nakita Newman was feted as the Most Valuable Player. Two of the evening’s earlier winners were brought back to the podium with Nakita Newman and Ann Stewart being honoured as ACAC All-Conference selectees. Finally, Ann Stewart made her third trip to the dais to receive the CCAA Academic All-Canadian award.

Next up, it was the tall men’s turn to take center stage with Head Coach Reagan Wood naming third year Forward – and the team’s point leader – Ryan McLaren as one of two athletes selected as the Most Improved Player.  Fourth year Forward Mike Malin took home the second Most Improved Player trophy. Second year Guard Bevan Purnell earned his second annual Outstanding Scholastic Athlete award while three time Most Improved Player winner Brett Jakubec moved up the award ladder claiming this season’s Most Valuable Player trophy.  Jakubec and McLaren both returned to the platform to receive recognition as ACAC All-Conference athletes. In his final year with the team, Ben Grimsrud was celebrated as the team’s lone Graduate.

The XCR/IT teams were next up in the spotlight with the female contingent heading up to the stage first.  Head Coach Matt Norminton started things off by naming Haley Dunwoodie as the team’s Rookie of the Year. Second year runner Baylee Frissell took the hardware as the Most Improved Athlete while two sport athlete Brynn deVries collected her second Outstanding Scholastic Athlete certificate of the evening. Second year athlete Elise Nawrocki was next up on the dais and collected the Most Valuable Athlete trophy and then hung around to be acknowledged as this season’s only XCR/IT athlete to receive an ACAC All-Conference nod.
Next up, it was the men’s turn to take the stage with Keith Spruyt being named as the Male Rookie of the Year. The Most Improved Athlete hardware went to second year athlete – and first year runner - Brad Agnew. The men’s Most Valuable Athlete accolade went to second year runner and team Captain (and incoming CSA President!) Ian Lee.

The perennially strong Badminton team were the next group to head up to the podium led by Head Coach Kevin MacAlpine. Leading off the parade of winners for this year’s squad was second year athlete – and first year Concordian – Kassidy Turcotte, who was named as this season’s Most Improved Athlete. Rookie teammate Kaylee Morris took home the hardware as the Most Dedicated Athlete. Second year stand out Takeisha Wang then headed to the stage to add several new pieces to her burgeoning awards collection.  Wang celebrated her second annual nod as both the Outstanding Scholastic Athlete and well as Thunder Badminton’s Most Valuable Player.  She rounded out the evening with her second consecutive ACAC All-Conference and CCAA Academic All-Canadian awards.  In addition to Wang, four other Thunder athletes received their parchments as ACAC All-Conference athletes: two-sport athlete Kassidy Turcotte and three-sport athletes Rachael Smillie and Connor Reinson along with first year teammate Braxton Wong.  Finally, Smillie and Reinson both received acknowledgement as Graduates.

Boasting a full Men’s team again this season along with a lone female teammate, Thunder Golf Head Coach Kevin MacAlpine named rookie golfer Michael Lastiwka as the team’s Most Improved Student Athlete. For the second year in a row, Connor Beeston collected the hardware as the Most Dedicated Athlete.  Celebrating her breakout season as the first golfer in Thunder Athletics history to play in the CCAA National Championships, two-sport athlete Kassidy Turcotte collected a parchment as the team’s Outstanding Scholastic Athlete as well as the trophy as the Most Valuable Player.

Led to the stage by rookie Head Coach Dylan Theroux, the Thunder Curling team led off the awards portion of their most successful season ever by naming the Gold Medal winning Women’s team Skip Veronica Maschmeyer as the Rookie of the Year. Next up to the podium, Veronica’s big sister Adrienne Maschmeyer received accolades as both the team’s Most Dedicated Athlete as well as the Outstanding Scholastic Athlete. Rookie Mixed team Skip Evan Van Amsterdam began his award haul for the evening by being named as Thunder Curling’s Most Valuable Athlete.  Claiming fully 50% of the spots available, no less than four Thunder athletes were feted as ACAC All-Conference athletes: Madysan Theroux, Adrienne Maschmeyer, Evan Van Amsterdam and brother Tyler Van Amsterdam.  Evan stayed at the podium to receive accolades as the ACAC Player of the Year for Skipping his squad to the ACAC Mixed Team Gold Medal. Thunder Curling closed out the evening with Adrienne Maschmeyer and fourth year veteran Brooke Gelasco receiving recognition as Graduates.

Thunder Athletics’ largest contingent of athletes ‘took the face-off’ on their portion of the evening with Hockey team Head Coach Dan Glegloff naming stand out Forward Ian McLellan as the Rookie of the Year. Next up, the puck bounced to fifth year player and team Captain Colin Minardi as he was selected as the Most Dedicated Player. Fourth year Goaltender and consistent academic high achiever Joel Wilson collected a parchment as the Outstanding Scholastic Athlete while the team’s rookie Goaltender Tanner McCorriston took home the hardware as the Most Valuable Player.  Rookie Ian McLellan took a second trip to the stage to collect two more parchments, receiving acknowledgement as an ACAC All-Conference athletes as well as being the first Thunder Hockey player to receive the ACAC Academic All-Conference award.  Rounding out the evening, the team took time to acknowledge their two Graduating players, Colin Minardi and Joel Wilson.

Thunder Women’s Volleyball began their presentation with Head Coach Trever Turner naming Libero Shae McDonald as the team’s Rookie of the Year.  The Most Dedicated Athlete trophy went to second year Outside Hitter and team Captain Madi Masterson.  For the second year in a row, third year Middle Julia Heupel earned the Outstanding Scholastic Athlete award and then turned right around to return to the podium as she was also honoured as the team’s Most Valuable Player.

On the Men’s Volleyball side, short and sweet was once again the order of the day with Head Coach Lucas Jacobson bringing Middle Hunter Scott to the podium as one of two players that he named as the co-winners of the Most Dedicated Athlete award.  Scott was joined on the podium by third year Libero Damien Leroy. Fifth year veteran and team Co-Captain Connor Reeves was named as the Outstanding Scholastic Athlete and then remained right where he was to receive the trophy for being the Most Valuable Player.

In his fifth year as a Thunder Minor Official (and his sixth ‘around the program’), Blair Cipywnyk was feted as this season’s ACAC Minor Official of the Year. Blair has filled multiple roles over the course of his service to Thunder Athletics and this season he was almost like a fourth member of the Athletics Department as he covered Stats for Soccer, PrestoStats for both Basketball and Volleyball and even filled in for absent colleagues a number of times at Thunder Hockey games.

In 2015-16, Thunder Athletics observed that it is a rarity when a Coach is selected as an ACAC Coach of the Year in their respective sport and so it is an even more unusual circumstance when not only one but in fact THREE Thunder Coaches were chosen as COY’s in 2015-16. In 2016-17, Thunder Athletics once again had not one, not two, not three but FOUR coaches that were so honoured.  Leading the parade of winners, Robbie Valpreda was named as the ACAC Women’s Basketball North Division Coach of the Year.  Next up, Robbie’s counterpart, Reagan Wood received accolades for winning his second ACAC Men’s Basketball North Division COY.  Rookie Coach Dylan Theroux was chosen by his peers as the ACAC Curling COY. Badminton’s Kevin MacAlpine also took home his third (and second consecutive) ACAC Coach of the Year parchment and was a double honouree having also been selected as the CCAA National Badminton Coach of the Year. All three coaches were recognized for their remarkable achievements by their respective team Captains.

This year, Thunder Athletics honoured three special athletes who have completed all 5 years of their eligibility in collegiate sport. Plaques of appreciation were given to Women’s Basketball’s Nakita Newman, Hockey’s Colin Minardi and Men’s Volleyball’s Connor Reeves who competed his entire college career in the Thunder gold and blue.

The Thunder Athletics Female Athlete of the Year is TAKEISHA WANG!

The Thunder Athletics Male Athlete of the Year is EVAN VAN AMSTERDAM! 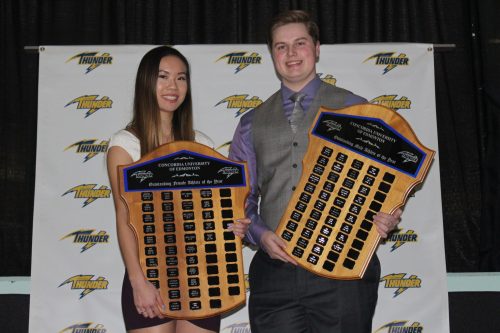 Athletes of the Year Takeisha Wang and Evan Van Amsterdam