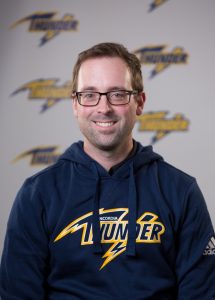 The award recognizes coaching contributions to sport and to student-athlete development over a period of at least five years.

“Having coached for more than a decade in the Alberta Colleges Athletic Conference (ACAC) and the CCAA, Kevin has had tremendous success throughout his tenure as Head Coach for the Concordia Thunder,” said Brittany Tierney, CCAA VP Sport Development. “Kevin has shown continued involvement in the Alberta badminton youth community and dedication to the development of Concordia’s student-athletes.”

MacAlpine, who is the first badminton coach to receive the CCAA Coaching Excellence Award since its inception in 2001, has decided to retire from coaching at the conclusion of the 2019-20 season. He is a three-time CCAA Badminton Coach of the Year recipient (2020, 2017, 2011) and has earned ACAC Coach of the Year honours on five occasions.

MacAlpine was a student-athlete at Concordia from 2001-05 before joining the coaching staff as an assistant. He has been the Head Coach of the Thunder badminton program for 11 years and has coached the golf team at Concordia as well.

“Kevin would be the first to tell you that this sort of recognition is a reflection of his team, though those that know him or have seen him coach know that he is able to bring out the best in his athletes,” said Joel Mrak, Director, Department of Athletics & Recreation at Concordia University of Edmonton. “This is a great recognition of his achievements this past season and over his career.”

The Thunder has earned four team silver medals and a gold medal at the ACAC Championships during the last five seasons. Concordia has also earned 10 ACAC medals as well as four medals at CCAA Championships over the past two seasons alone.

MacAlpine is also heavily involved with the Alberta Winter Games, as coach of the Zone 5 badminton team since 2004 and coaches at M.E. LaZerte High School. In addition, he has served as the ACAC Badminton Convenor, the Metro City of Edmonton Convenor and the ASSA Badminton Commissioner.

“This award is really a reflection of Kevin – he invests in his athletes as individuals and as people,” said Mrak. “He has given his time freely to all his athletes at CUE, others in the badminton community, in the schools and clubs, and is incredibly selfless with his time coaching.”

The CCAA continues to work in partnership with the Coaching Association of Canada (CAC) and recipients of the CCAA Coaching Excellence award receive a one-year membership to their Chartered Professional Coach designation.