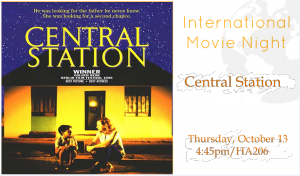 Invitation to the International Movie Night on Thursday October 13th, at 4:45 pm in HA 206.

We will watch the award winning Brazilian-French production "Central Station". "Fernanda Montenegro's performance earned her critical acclaim and an Academy Award for Best Actress nomination. The film itself was nominated for the Academy Award for Best Foreign Language Film." (Wikipedia). It has won many awards: (https://en.wikipedia.org/wiki/Central_Station_(film))