Posted on: Oct 21, 2019
All are invited to hear Concordia violin instructor Frank Ho perform Beethoven’s beautiful Spring Sonata (Violin Sonata No. 5) along with our piano instructor, Dr. Ping-Shan Liao, Monday afternoon.
The performance, part of the weekly School of Music seminar series, runs 4:00 to 4:50 pm in the Lynn and Stephen Mandel Music Room (Alumni Hall 314).
Please come enjoy this famous sonata for violin and piano! Admission is free.
Violinist FRANK HO enjoys a multi-faceted career as a chamber musician, soloist, and pedagogue. His early training was at the Alberta College (now MacEwan University) Conservatory of Music. Further studies with Sidney Harth and Erick Friedman (Yale School of Music) and Yfrah Neaman (Guildhall School of Music and Drama in London, England) led to performance opportunities on three continents. Highlights include concerts at venues such the Royal Festival Hall and the Purcell Room in London; Weill Recital Hall, Alice Tully Hall, and Merkin Hall in New York City; and numerous campuses and concert series in western Canada. Many of his concerts have been featured on the CBC.
Frank is currently a faculty member of the MacEwan University Conservatory of Music, where he also serves as their External Relations Consultant, and sessional violin instructor at King’s University and Concordia University of Edmonton. Frank is an active adjudicator nationally and internationally (most recently as a member of the international jury panel for the 2019 Hong Kong Music Schools Festival), as well as a member of the College of Examiners for the Royal Conservatory of Music. He is currently the concertmaster of the Concordia Symphony Orchestra. He is a sought-after teacher: many of his students are previous prizewinners of local, provincial, and national competitions. In 2017, two of his students were chosen to perform at Carnegie Hall in New York City
through the American Protégé International Competition. 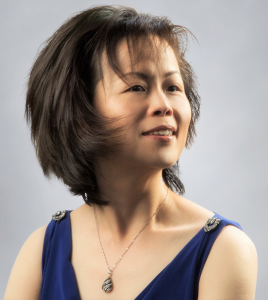 Pianist Dr. PING-SHAN LIAO has presented numerous solo concerts and fascinated audiences worldwide with her musical talents. Throughout her career she has also collaborated as a chamber and concerto pianist, appearing with the International Chamber Ensemble De Rome, the Concordia Symphony Orchestra, Edmonton’s Festival City Winds, and the Prairie Jubilation Wind Ensemble.

Born and raised in Taiwan, Ping-Shan developed her passion for music at a very young age and won many competitions in Taiwan. After graduating from the National Taiwan Normal University, she pursued her graduate study in the United States and received her Doctor of Musical Arts degree in Piano Performance & Literature from the Eastman School of Music, University of Rochester in New York. While studying at Eastman, Ping-Shan was invited to present a solo concert at the Alexander Goldenweiser Memorial Museum in Moscow. She was also selected to perform at the Taiwan National Recital Hall in 2001 as one of the “Young Artists Series” concerts, which recognize the outstanding global achievements of Taiwanese musicians.

Ping-Shan is a clinician for many festivals and competitions and was appointed an Adjudicator of Piano by the National Musical Arts Association of Republic China in 2000. Before moving to Edmonton she served as a Professor of Piano at Prairie Bible College in Three Hills, Alberta. Ever since, she has been teaching piano and piano pedagogy at Concordia University of Edmonton.