The Edmonton Eskimos take to CUE’s Field for Training Camp 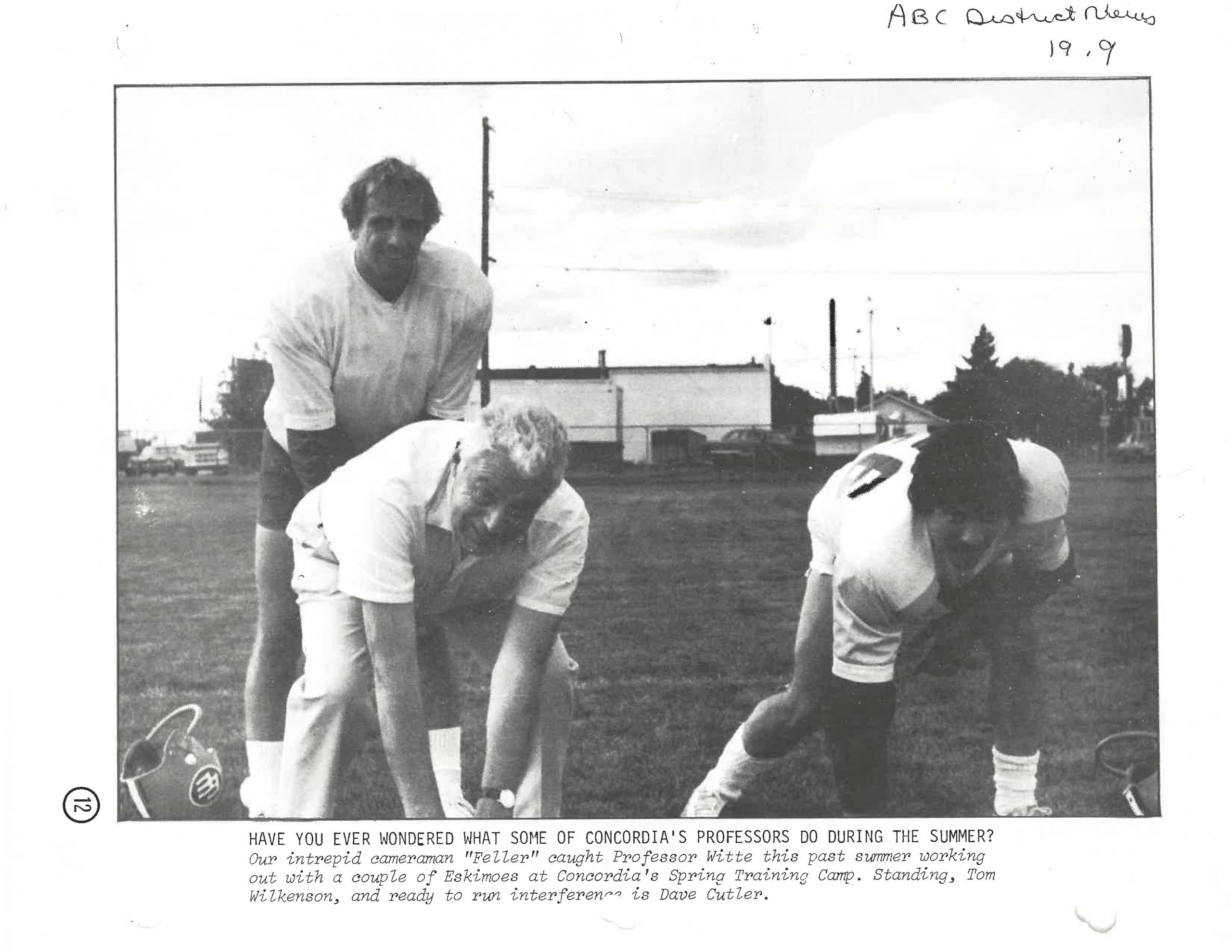 The Edmonton football team previously known as the Edmonton Eskimos has a history with Concordia University of Edmonton which dates back to the 1970s when they used Concordia as their training camp site. During the spring and summer months they took over the football field, gymnasium, and dormitory facilities. Even some faculty joined in the “training,” as you can see in the fun photograph of Professor Witte with quarterback Tom Wilkinson and place kicker Dave Cutler. In exchange for using these facilities the Eskimos agreed to improve the college grounds and were to pay $25,000 for the resurfacing and renovation. However, a fire that destroyed parts of the Concordia College gymnasium in 1978 held back the Eskimos training camp plans that year. This damage to the building was estimated at $750,000 and this eventually led the Eskimos personnel in a search for an alternative place for the training camp. But it seemed as if CUE was perhaps the perfect fit; as Frankie Morris described it, “everything else outside of Concordia doesn’t suit our needs.” The main problem was the showers, for when the gymnasium burned, the changing rooms and showers were lost. It all depended on the showers because if the showers could be repaired then the team would most likely use Concordia for future training camps. The Eskimos had anticipated a $40,000 expenditure for the renovation and use of CUE’s football field for their training camp and regular season practice field, but the situation was uncertain after the fire. However, the team did return to Concordia for their pre-season training throughout much of the 1980s and 1990s.

I think it is unique how the Edmonton Eskimos chose Concordia as their venue instead of other institutions and believe that this says more about Concordia and how much it has to offer. Concordia and the Edmonton Eskimos’ history has thus shaped what Concordia University of Edmonton continues to be, a welcoming institution. Personally I would have attended CUE as a post-secondary student during the times when the Eskimos used their field for training purposes. There was something special about Concordia’s relationship with this city’s football team that allowed it to stand out from other institutions.

Hi! My name is Dimpi Shah, and I am currently in my last year at Concordia University of Edmonton in the Bachelor of Science program. My major is biology and minor is English literature; in high school I was always interested in science and realized that biology is my strong subject area. Outside of university, I enjoy activities such as dancing, taking photographs and watching movies.