The Faculty of Science is thrilled to present the second in its Distinguished Scientist Lectureship Series. 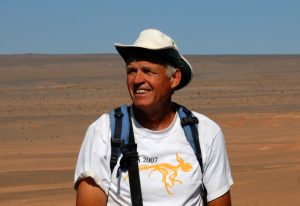 Dr. Philip Currie is an internationally renowned palaeontologist and has been a great influence in developing Alberta as a centre of excellence in palaeontology.  He will be presenting  “Hunting dinosaurs in Alberta, one of the richest dinosaur sites in the world”.

All are welcome to attend this exciting presentation.

Dr. Currie has published more than 225 scientific articles in peer reviewed journals, another 50 scientific papers in conference volumes and books, 158 popular articles and twenty books, focussing on the growth and variation of extinct reptiles, the anatomy and relationships of carnivorous dinosaurs, and the origin of birds. Fieldwork connected with his research has been concentrated in Alberta, Argentina, British Columbia, China, Mongolia, and the Arctic and Antarctica.

Recognized worldwide for his work, Dr. Currie is a highly decorated palaeontologist, including:

In 2015, he was deeply honoured by the opening of the Philip J. Currie Dinosaur Museum in Wembley, Alberta.

He has given hundreds of popular and scientific lectures on dinosaurs all over the world, and is often interviewed by the press. In 2012, Dr. Currie was involved in the development of University of Alberta’s first Massive Open Online Course (MOOC) called DINO 101. It had its premiere in September of 2013 and by now more than 100,000 students from all over the world have taken this course. A new mini-MOOC (Paleontology: Theropod Dinosaurs and the Origin of Birds) was released in 2016.

Concordia University of Edmonton is proud to host such a distinguished guest and welcome all to join us and be inspired.