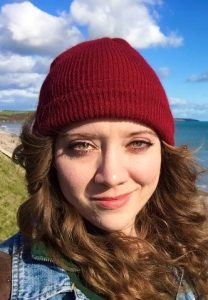 I specialize in Irish and British women’s cultural history and production in the twentieth century. My research mainly focuses on the distinctly textual forms of feminism during this historical era, specifically the role of the periodical press in the mid-twentieth century Irish women’s liberation movement. My current research focuses on developing an historical approach to print grounded in a reading of both its material processes of production and sociospatial modes of circulation that can help re-map the relationships between feminist histories, cultural spaces, and social changes.

As an anti-colonial and anti-racist feminist scholar, I am also interested in the ways literary and social movements reinforce, undermine, or confront multiple systems of oppression and discrimination. In my future work, I plan to examine the competing demands of feminism and nationalism during the rise of The Troubles in Northern Ireland and unpack the ways in which print offers a cross- or trans-border place to think through the space of the border and the future of feminism – an issue made even more pressing by the 2016 Brexit referendum.

I have taught introductory courses on critical analysis, literature in historical perspective, texts and contexts, and case studies in research, as well as American literature, specifically issues of crisis and conflict, and English for engineering students. I currently teach introductory English and British/Irish literature.

Review of Irish Studies in Europe, vol. 5, no. 1, 2022, spec. iss. on “Irish Sexual Liberation and Its Literatures,” edited by Laura Sydora and Robert Brazeau.

“Irish Women Evicted: The Rural Home and the Gendered Politics of Economic Morality in Claire Keegan’s Walk the Blue Fields.” Spec. issue of Review of Irish Studies in Europe, vol. 3, no. 1, 2019, pp. 123-36.